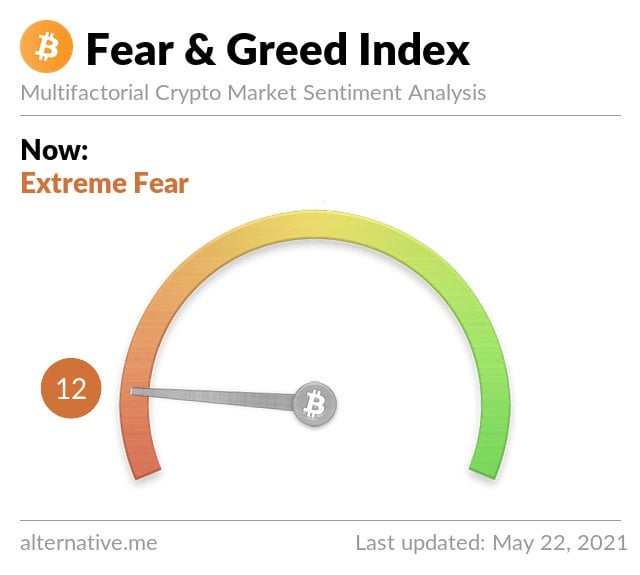 For those you aren’t aware, the Crypto Fear and Greed index uses 5-6 measurements to assess the current sentiment of the market and then rates that level of emotion on a scale of 1 to 100. 1 is extreme fear and 100 is extreme greed.

Those measurements are objective of course – they look at volatility, social media, momentum, dominance, google trends and (now paused) surveys.

Here is the link to the site, you can look at the chart, click “max” and you will see a movement of the index since the start of 2018.

In theory, the idea should be that in cases of extreme fear, the market is terrified and panic selling, and it is a good buying opportunity. When the market is in a state of extreme greed, people are getting extreme fomo and buying regardless of the elevated prices. Hopefully you get the picture.

There is a lot of movement in the chart but it is the extreme fear and greed regions that interest me – specifically around the region of 80 plus or 20 below.

Today the fear and greed index is at 12 – not a record low but very close and certain the lowest for a very long time. And yet the price is at $37,500 – still historically extremely high.

Looking at the index to date, there are only five other times in the past where the index has plunged below 20. I thought it would be helpful to look at that regions, what was happening and the price at that point, and to think of those as historical buying points:

This is probably the point at which there was a realization we truly were in a bear market, with bitcoin already down around 65% since its top. While buying at this point (the start of a 1 year bear market) is not exactly enticing, that price was more or less the average price for most of the year. Certainly not a bad entry point if you had resisted the temptation to buy in the entire bull market of 2017.

Around March of 2018 was a bit of a “dead cat bounce” with the price recovering to nearly $12,000. Many people breathed a sigh of relief, portfolios turned green and it seemed like the bear market was over. Nope. Bitcoin immediately crashed right back down again to prices similar to February. Hence a moment of extreme fear.

Again, this wasn’t a particularly bad buying point historically, having just avoiding fomo of the surge in bitcoin up to that much higher price level.

Now we’re talking. This was the time of the infamous “hash wars” when BCH forked and the markets plunged into absolute chaos. Bitcoin crashed through its $6,000 support level and halved in price.

This was an absolute buying opportunity – perhaps the opportunity of a lifetime, with an average price around this level for six months. Happy to say I bought right through but not enough. Each buy at the time seemed painful, and it was embarassing at times for people to even know you were in crypto.

Also recall that at $3,100 very few people were calling this the bottom (shout out to Smart Contractor from twitter here who picked it). Many had buy ladders down to $1.3k, and it seemed a fall to at least the mid $2,000s was obvious. A little bit like those all calling for $25k right now.

This one might feel like a bit of an anomaly, but in some ways it feels quite similar to today. Bitcoin had just ripped from $4k to around $14k and the bull run was on. After a short period, bitcoin fell sharply and the price started to collapse downwards. I think “5” is a bit extreme for fear but this was the realization that the bull market might be over. For the next six months, the bitcoin price let out steam down to $6.5k (aside from one day when President Xi managed to pump us back to $10,300 – oh for the days when China would actually pump our prices).

So not a great buying spot, but better than FOMOing at $14k and historically still not bad.

I don’t think this one needs much explanation. The corona effect was sharp and deadly, with the bitcoin price absolutely collapsing quickly. Again, I don’t think we have any debate that this was one hell of a buying opportunity. Even more if you had cash to deploy in the weekend. One person I know bought ETH at $85 or so at that point. And there are some people suggesting the charts today are quite similar to this. Hmmmm.

What can we say? I think the terror here is real. But at the same time a billion dollars of stable coins just flooded into binance and bifinex, and funding rates have switched negative. If we look to the panic in November 2018, this was the start of a six month period of hell – worst case scenario we might get something like that, but also recall that in November the worst was already nearly over.